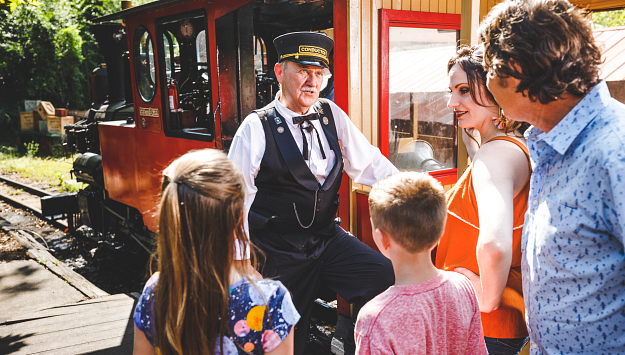 All Aboard...Adventure On The Rails Awaits

There are just certain sounds that are synonymous with Silver Dollar City. These beloved noises are what make your day in the park complete. Take for example the Frisco Silver Dollar Line’s whistle...the familiar WHOO, WHOO happens like clockwork several times a day. A signal that the iconic train is making its 20-minute journey around the park.

In 1962, it was decided that what the park needed was a new attraction and so the original train, a smaller 4-4-2 Davenport engine, was purchased. Its most notable former life was as a part of the automotive connoisseur Henry Ford’s personal collection, used to teach and entertain his grandchildren. So with this history, of course, it only made sense that it could continue to entertain at Silver Dollar City! But, like most things in life, it took some figuring out to make it all work.

One element of surprise that threw the crew for a loop was that the little engine just couldn’t fully make it completely around the park with all the varying grades without losing steam, thus out of necessity the “train robbery” was born. Today engineers no longer need to stop to build steam to get the legendary red trains back to the depot, but the ride just wouldn’t be the same without Alphie and Ralphie’s infamous stickup.

After the first several years of the Frisco, and the realization of how popular the ride was, The City knew it would need a locomotive that was more powerful and more than one to keep the attraction chugging along. The next acquisitions were larger German switch engines. When riding the rails today, there are 5 “personalities” that take guests on the unforgettable trip through the Ozark countryside. Each numbered and each different 504 (distinct with the black fuel tender that follows directly behind the engine), 43 (distinguishable by the smaller smoke stack), 76 (the largest weighing in at 16 tons), 13 and 14 (sisters coming off the original production line one behind the other). Plus, you can still catch a glimpse of the original little train, the “Belle Starr” as she was affectionately called, before she was retired, at the depot where she permanently resides.

A tradition for most families, a trip to The City wouldn’t be complete without a trek to the depot to catch a ride on the Frisco Silver Dollar Line with each change of the season. Fall is a great time of year to take in the kaleidoscope of color that blankets the park on a trip!