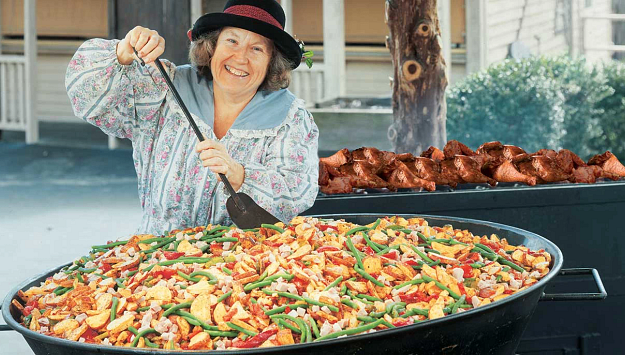 The Story Behind A 5-Foot Skillet Fit For A King

When City Citizen Shirley Tolar was a little girl growing up in America’s heartland she had no idea that she would make her mark on the culinary world at Silver Dollar City. She did know that her Grandma Lizzy made the best skillet succotash that side of the Mississippi. Gathering the 20-some siblings and cousins around the supper table the family would slice the colorful vegetables they grew on the farm before church and then come back after to toss the vittles in the big skillet with the addition of chicken or ham, spices, oil (or lard in the day) and cook it! Shirley was her biggest helper and took turns with the others stirring the savory mix.

Time went by and Grandma Lizzy passed, but Tolar would often honor her legacy by making the familiar and comforting succotash. After coming to work at The City, Shirley said, “I thought Grandma’s recipe might be a perfect fit for hungry guests looking for something hardy and delicious.” She convinced the bosses to try it and they were blown away by the combination of flavors and rich aroma.

Fast forward to present day and find that this signature family recipe not only made it on the menu over 40 years ago, but it inspired the creation of the enormous 5-foot skillets The City custom makes in-house, because they couldn’t keep the bowls filled fast enough. In fact, Silver Dollar City, known as the largest private consumer of okra in the United States, serves up more than 120,000 pounds of succotash and harvest skillets each year...that’s more than one meal fit for a king! And, Tolar’s delectable family recipe kick-started the skillet empire of abundant creations over the years including the 6 different kinds of bowls the park dishes out today.

In a large skillet sauté onions and peppers in 1 tsp pf olive oil, remove from skillet. Add corn and squash vegetables to the skillet, cooking until soft. Remove from skillet into a separate bowl. Then add 1 tsp of oil and chicken. Cook on medium until browned and cooked through. Remove from Skillet and reserve until later. Add remaining oil to pan with the okra. Fry until golden brown then add the salt, pepper and garlic. When okra is done add back the vegetables and chicken heating everything through. Serve and enjoy!