Know Before You Go

We are SOOOO excited that you’ve chosen to spend your family’s quality time with us and can’t wait to welcome you on the day of your visit. But before that, we want to give you some insider tips on how to navigate your adventures and make the most of your day…

Challenge Your Sense Of Discovery

Our beautiful park (lovingly know as “The City”) is NOT your average park…it is filled with adventures that our founders believed were best experienced as “surprises”. You’ll notice when you arrive that there are trees and lush landscaping everywhere that add to The City’s charm, but all that “nature” coupled with our winding and meandering pathways can sometimes make rides and attractions seem hidden to first time visitors until you get more familiar with the park. So, get ready to embrace your inner explorer and keep these tips for wayfinding in mind…

The park is really just 1 BIG CIRCLE with many little trails coming off it. The circle starts at the TOP of the park on The City’s Square and is completed at the BOTTOM of the park in the Rivertown Area. 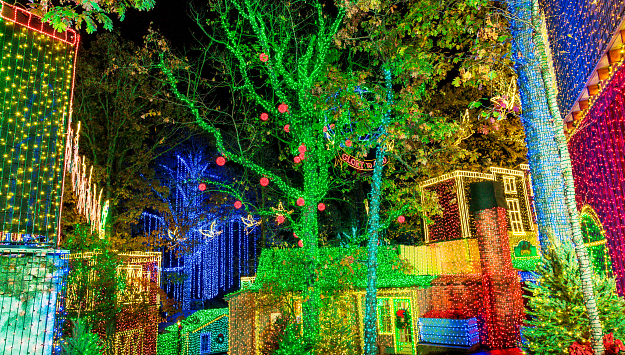 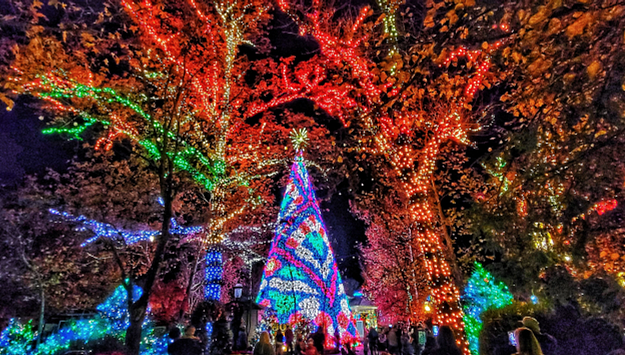 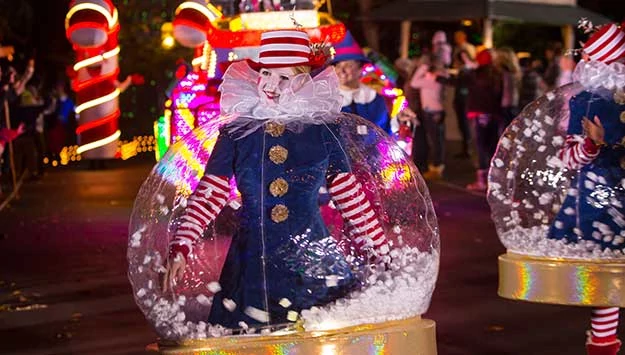 Let’s talk about everyone’s favorite stops that are a MUST-SEE for the most glow!

Right from the start as you enter The City’s Square at the TOP of the park, you will be greeted by the magnificent state-of-the-art animated 8-story tree, the star of the enchanting Joy On Town Square sight and sound spectacular, captivates audiences nightly. The bedazzled wonder plays 8 different songs each with its very own magical lighting treatment synchronized in time with the surrounding Christmas trees, festoons and buildings around the Square.

The City’s Square is also a great place to catch another favorite Rudolph’s Holly Jolly™ Christmas Light Parade as it loops around the park spreading cheer featuring 9 musical, lighted floats, plus colorful costumed characters including Rudolph’s friend Bumble the Abominable Snow Monster™ and many more. Not able to see it on the Square…no worries, the parade makes its trek along the parade route (marked with snowflakes on the map on pages 4 & 5) twice nightly.

Just off the Square, with an entrance portal BETWEEN Hannah’s Ice Cream Parlor and The Silver Dollar City General Store is Christmas In Midtown® in the heart of The City featuring 1.5 million lights aglow on towering structures, dancing luminaries, light tunnels and more picture-perfect moments to capture.

Head down Valley Road, past Tater Twist until you find the banks of the Mighty Mystic River where you’ll find the citizens have light up the streets of Rivertown at the bottom of the park. The tantalizing whiff of the tastiest barbecue this side of the Mississippi will guide you to the center of Rivertown where you will find the Riverfront Smokehouse. This is the perfect place to enjoy dinner on the heated deck before heading over to Dockside Theatre where you will enjoy The City’s special musical version of the Greatest Story Ever Told in The Living Nativity.

For the more adventurous visitors there’s rides on recordbreaking coasters, weather permitting, where the starry sky on crisp cool nights will fill your hearts with thrills! 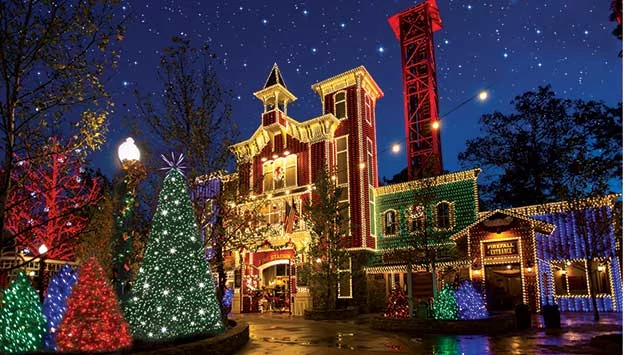 From the TOP of the park on The City’s Square go RIGHT
first, this is Valley Road and is the fastest path to our 4 kidfriendly areas, plus Thunderation and Time Traveler.

3) Tinker Junior’s Toy Shop — Back on Valley Road GO PAST the Tater Twist stand and Hillcreek Pottery. Here you will find Boatworks Theater on your LEFT. 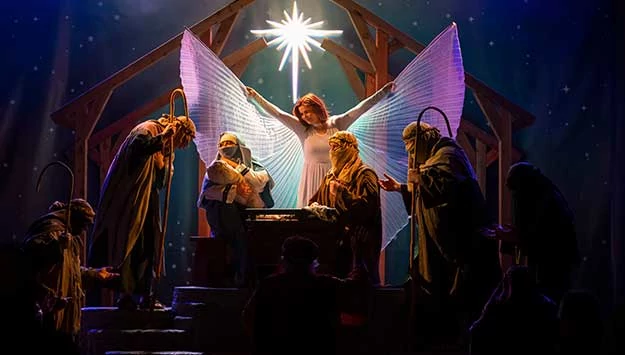 Of course, you have to see at least one of our 2 Broadway-style
shows—A Dickens’ Christmas Carol or NEW Coming Home
For Christmas, but we’ve got so much more entertainment
on stages throughout the park this holiday season. 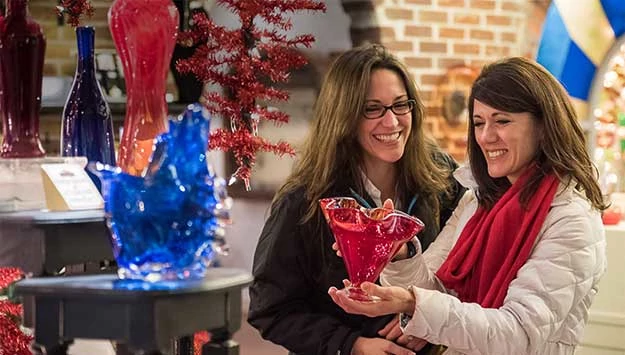 If you’re looking for thoughtful gifts for your loved ones this Christmas look no further than the 60 unique shops throughout the park! Discover stunning works of art made right in front of your very eyes by talented
master craftsmen creating handmade treasures that make the best gifts to give or to keep. From blown glass ornaments and snowmen to wood carved Santas, pie plates adorned with snowflakes and Christmas trees and even homemade candies to fill stockings!

Check out these stores during your visit for holiday demonstrations: