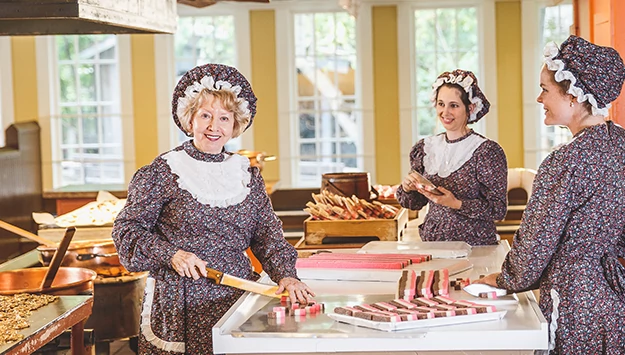 Through the years, June has adopted a large extended family. From apprentice candy makers to nationally known dignitaries, all are welcome at Brown's Candy Factory.

A Craftsman In The Making

Ozarks native June Ward was born at Lake of the Ozarks, and raised in Galena and Reeds Spring, Missouri. In August of 1968, June decided to help friend Ted Miller, who was recruiting people to work at Silver Dollar City during the busy fall crafts festival.

Since candy making at Silver Dollar City is demonstrated in front of guests, it takes personality, something June has plenty of. Sampling the product is just one of the benefits for June and her team, a long time staff of fellow candy makers. "We are our own quality controllers. And if anybody says it's not our responsibility, we overrule them." June says, admitting to no one favorite type of candy.

When asked why candy has become her life's work June answers, "I really love what I do and the people I work with. Relationships are everything. "Reluctant to leave the shop to travel, June once told Silver Dollar City Publicist Don Richardson, "If you're good enough, they'll come to you," and she was right. Over the years Silver Dollar City has hosted many dignitaries including Al Roker, Willard Scott, Mark McEwen, Walt Adams, Loretta Lynn, Garth Brooks and Buzz Aldren to name a few, and all have stopped to meet the crew of the candy shop and the vivacious Miss June. She was even the stand-in for Donna Douglas (who played Elly May) during the filming of the Beverly Hillbillies at Silver Dollar City. When Ms.Douglas returned to speak at Silver Dollar City's Young Christians' Weekend, she of course stopped in to say hello.

June approaches her craft with humor and a sincere appreciation for the art of candy making. She has a deep dedication to share her knowledge with guests and new candy makers alike. As for the young people who work in the shop, she has a genuine affection for them. Many come back year after year until they graduate from high school or college. When they move on they keep in touch, and bring their families back in to meet the crew. "They become the shop's extended family, it's special. The ties you make here—you can't buy stuff like that, you have to live it," says June.

June is one of the original members of "The Royal Order of the Pig" — a remote division of Silver Dollar City claiming to be the corporate headquarters. Affectionately known as the Candy Queen, or "Queenie", June is legendary for playing practical jokes. In the early days, when owner and co-founder Jack Herschend was out of town, June would write memos on his stationery signed JH for June & Hazel or June & Holt (fellow candy makers).

Under the tutelage of the beautiful postmistress Jewell Boseman, June first worked in the Silver Dollar City Post Office hand stamping the popular Silver Dollar City postage paid stamp on letter sand postcards mailed by guests. When the candy shop (a new addition in 1968) needed help, June got the call. The rest, as they say, is history.

June learned the craft of making candy from Paul Davis and Paul Whitmer, who worked at Silver Dollar City. Flossie Inmon, from the Davis Candy Company, taught her about making chocolates. All of these individuals had made candy for the majority of their lives;they were true masters. June also fondly remembers working side by side with Hazel Murray, aka Ma Brown, for whom Hazel's Blown Glass was named.