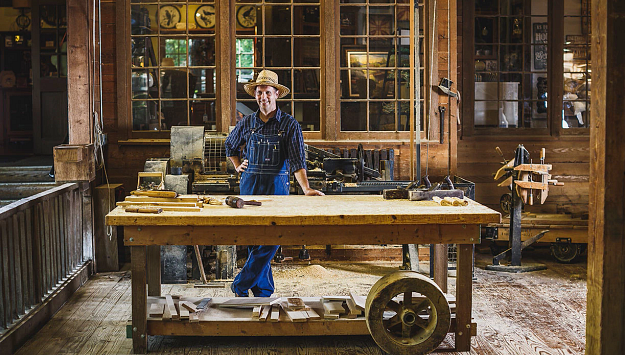 Warren Cook has always had a passion for craftsmanship, as a child he began experimenting with different materials, building anything he could with his own two hands. Crafting small picture frames quickly grew into crafting intricate furniture sets. In 1990, Warren had the opportunity to turn his passion into a career.

Originally from Bunker, Missouri, Warren received his teaching degree from SMSU, now MSU, in Springfield, and started teaching in Hollister. Although he enjoyed working with kids, he missed the challenges of building. After teaching for one year, Warren visited Branson for the summer and came to Silver Dollar City where he learned a position was available at the new shop, Heartland Home Furnishings. Excited about the opportunity to pursue his lifelong hobby, he applied immediately. Now, several decades later, Warren enjoys every moment.

In this traditional 1800s style shop, Warren has the opportunity to work with traditional tools that are not typically found in furniture shops anymore. Some tools used in the shop are from the 1800s, allowing the craftsmen the freedom of hand crafting and design. Warren makes a variety of furniture sets for the shop including his favorite, bedroom pieces. Heartland Home Furnishings showcases these pieces along with bookcases, jelly cabinets, entertainment and computer centers, and two-level opening coffee tables, a unique guest favorite.

Warren enjoys the different seasons at the park, allowing him a chance to interact with guests, as well as crafting furniture. He said his favorite memory at the park was when he was awarded the honor of Master Craftsman. He has been recognized on numerous occasions by guests and employees for his craftsmanship, including several awards such as Craftsman of the Year and an induction into the Crafts Hall of Fame. He has dedicated his life to wood craftsmanship and his family. Warren says to have his skills recognized among Silver Dollar City’s talented craftsmen has been one of the proudest accomplishments of his life.

“It’s a one-of-a-kind experience working at Silver Dollar City,” he says. “I’m pretty fortunate. I get to do what I love and work around some of the best people I’ve ever met. Not many people can say that.”