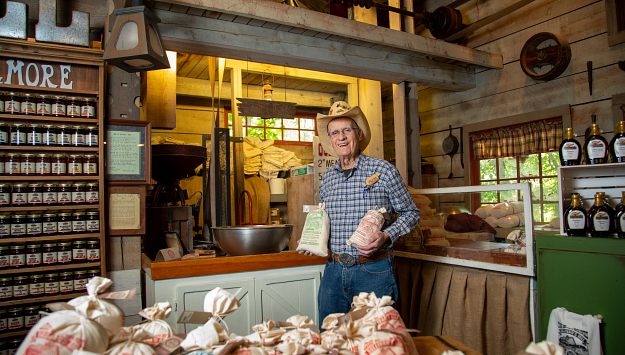 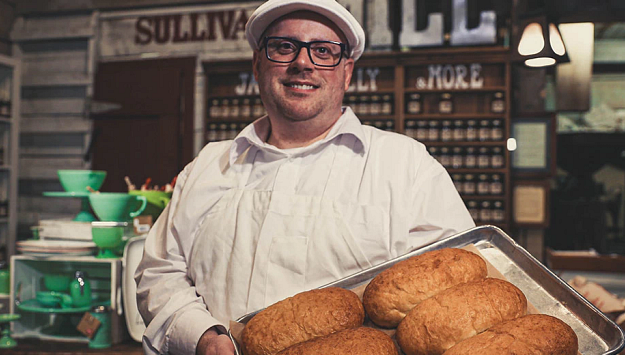 Frank Capps grew up on a farm near PoplarBluff, Missouri, where his family raisedcotton and other crops. "We had a goodlife," Frank remembers. "There was alwaystime to go fishing." He followed his sisterto Indiana, where he met his wife andattended classes at Indiana State Universityin Evansville.

Capps has worn many hats in his lifetime;he's been a carpenter in Colorado, owned andoperated mobile home parks and was DJ"Country Frank" on WBNL in Booneville, IN.Frank and his wife had been vacationing inBranson for many years before they decidedto move here in the mid 1990s. He thought ofcontinuing his radio career here, but aftera stint as a staff writer for the BransonBusiness Journal, his journey led him toSilver Dollar City where he could tell hisstories in person.

Capps says it was his love of old thingsthat first piqued his interest in Sullivan'sMill. Wayne Adams trained him to grind wheatand corn on the old water-operated gristmill in March of 1997. In November of thatyear he baked his first loaf of bread, andhas been baking ever since. "Baking atSilver Dollar City is one of the most funthings I've ever done," states Capps. "Youmake a lot of lifelong friends here.Families grow up visiting and bringgeneration after generation with them. Itbecomes a family tradition," he explains,adding, "When they walk in the bakery, thesmell reminds them of Mother's orGrandmother's kitchen." Capps appreciatesthe family atmosphere at Silver Dollar City,"When guests enjoy the products andexperience - that's its own reward."

As you stroll through Sullivan's Mill,you'll notice Frank's poetry hanging on thewalls. Stop and read "Ode to Sullivan'sMill" and a children's book entitled"Chipper the Silver Dollar City Chipmunk".Both were sold at Madison's Book and Printduring the run of their publication.

In addition to writing poetry and books,Frank also likes to write music. His love ofstorytelling and country music is a lifelongfamily affair. Frank's cousins had a radioshow in Kennett, Missouri. Known asStarlight Wranglers, they were one of thefirst groups Elvis played with in his earlydays.

As he got older, Capps enjoyed visiting theRyman Auditorium in Nashville, TN. After theshow he used to visit with stars such asLittle Jimmy Dickens, Ernest Tubb, MartyRobbins, Bill Monroe and Carl Smith. "Inthose days the stars would greet people inthe back alley or on the front steps andeven sit and tell stories," Frank says, andhe'll be happy to pass those stories alongto you, too.

Small town baker Jacob Mantonya has a big heart for cooking that sparked from his childhood experience finessing meals for his family at the early age of 10. Since then, Jacob has devoted over a decade of his life to further developing his culinary and hospitality skills.

Born and raised in Cassville, Missouri, Jacob frequented Silver Dollar City with his family and friends and saw it as a fun and positive environment filled with opportunity. Jacob enjoys baking in the Sullivan’s Mill kitchen alongside his fellow bakers where they proudly produce their number one seller…over 39,000 loaves of cinnamon bread a year!

Jacob says the best part of his craft is the joy it brings to people. In turn, he hopes to “inspire children, young adults and parents alike to get into the kitchen more and expand their culinary abilities.”