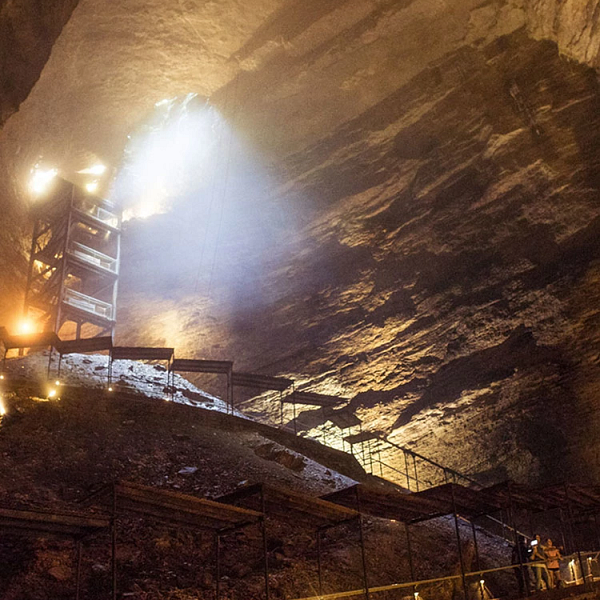 In the beginning, there was Marvel Cave.

Silver Dollar City theme park evolved around the entrance to one of nature's greatest wonders, Marvel Cave. In 1894, Canadian entrepreneur William Henry Lynch and his two daughters, Miriam and Genevieve, opened the cave as an Ozarks tourist attraction. For more than 50 years, Marvel Cave operated as a tourist show cave. In 1950, Hugo Herschend, a Danish immigrant from Chicago, his wife Mary and sons Jack and Peter, leased the cave. By 1960, the Herschends introduced their 1880s Ozark Mountain Village, Silver Dollar City theme park. The theme park was literally built around the entrance to Marvel Cave, upon the foundations of a genuine 1800s mining town - Marmaros.

The Early Days of "The Devil's Den"

In 1541, Spanish explorers entered the cave hoping to uncover riches and possibly the fountain of youth. Then, in 1869 explorers descended into the cave looking for priceless mineral deposits. Led by Henry T. Blow, a St. Louis lead industry leader, the party traveled by horseback to the entrance of Devil's Den. One by one, the miners lowered themselves over 200 feet down into the vast unknown blackness. They carried lanterns for light and spent hours studying the cave walls carefully searching for signs of mineral deposits. The miners returned to the surface late that evening having failed to discover the lead ore they sought, but convinced that marble could be found inside the cave. Their report sparked the interest of area locals who decided to rename the cave, Marble Cave. It was not until after Mr. Lynch's death in 1927, that the cave's name was changed from Marble to Marvel Cave. In fact, no marble was ever mined from Marble Cave, only bat guano.

When visiting Silver Dollar City, a tour of Marvel Cave is always included with your ticket, with tours departing throughout the day, weather permitting. Marvel Cave is a wet limestone cave, complete with formations that are still alive and growing! To begin, you will travel 300 feet below the surface and enter the Cathedral Room. The breathtakingly beautiful Cathedral Room is the largest cave entrance room in the United States. The visitors' trail consists of stairs and ramps. The tour lasts approximately 60 minutes, with most of that time spent descending and climbing stairs. The strenuous nature of the tour requires us to not recommend the tour for visitors with heart or lung conditions, bad backs, weak knees or ankles. A trained cave guide will host your journey and provide you with interesting and entertaining anecdotes of historical or geographical importance.

After descending nearly 500 feet below the surface, how do you get back up to daylight? In 1957, cave operators installed a unique cable train designed to take cave visitors up the half mile, 1070 foot climb back to the surface!

Novelist Harold Bell Wright represents one of the many famous spelunkers to venture into Marvel Cave. Missouri's deepest cave is rich in history and beauty. Don't miss out on a unique opportunity to see a side of Mother Nature few are fortunate enough to experience. Tour Marvel Cave the next time you visit Silver Dollar City!